As a big fan of podcasts, I go through them pretty quickly. I have recently been binging my way through a 6 episode podcast called Dr. Death, about a spinal surgeon run amok in Texas. I would recommend it though it is sad and frightening. Though it took place a few years ago, it also shows some of the scary ways false online reputation can be very dangerous and even life-threatening.  I have posted in the past about the scary world of fake reviews, and how sometimes a 4.8 or 4.9 is actually a better rating than a 5.0. Many small business owners live in fear of that negative review showing up and ruining their online reputation.  In actuality, if you are doing a good job as a business, you are probably going to average over 4 in reviews when they come in organically, but that one 1 star review always keeps us up at night and won’t go away from the back of our minds.

The Dr. Death Podcast Made Me Focus on Online Reviews

As a digital marketing consultant, I am deep inside this world, and one can forget what the world looks like to people that don’t live and breathe in this environment. Policing of fake reviews and online presence has gotten better in recent years, but still is far from perfect.  In the past year, several companies have had large numbers of their reviews removed by Google for using unethical review processes.  Yelp has a policy of not even allowing you to technically ask for reviews because they feel like they should come naturally, and there continues to be an industry out there for businesses to just buy fake positive reviews, though we hope Google is getting better at weeding these out.  As Google gets better at this, we expect review scores, text, and distribution to be of increasing importance to ranking in search engines.

All that being said, just a few years ago it was even easier to manipulate the system, and the horrible doctor that is the focus of the Dr. Death podcast was quite confident in his online presence.  At one point he told someone to look him up online and let him know if the person found anything negative about him. Though the podcast doesn’t explore his online reputation in depth, it is clear he had built a strong but fake presence online that masked what he was actually doing that led to the deaths and paralysis of many of his patients.  One victim spoke of the glowing reviews and video on his website convincing him that he was a reasonable choice to perform his surgery. Though I think we have progressed to the point that many know these days not to count on only the source website for our research, it goes to show that with money you can paint a pretty positive view of yourself. In the medical world, this is dangerous to the point of being potentially deadly. Google tends to enact their highest quality standards on sites that the industry calls the “Your Money or Your Life Sites” that are responsible for people’s health and finances. I think they have come a long way, but it is important to get references from all around the internet and the real world if possible.

Though with medical issues it can be tough to know someone that has gone through the same thing, it is still important to make sure a doctor knows what they are doing. Granted Dr. Death is an extreme case, and hopefully a one in a million type of situation, it did shine a light on an industry that was set up to protect themselves and not really the patients in general, so in a way we need to be more diligent in taking care of ourselves and checking out as many reviews as we can around the internet and the offline world.  It is one thing for a doctor to have lower scores because they don’t have a great bedside manner or have long waits in their waiting room, and another if they are actually failing at surgery or helping their patients.  In a scary world of finding doctors that will take our insurance and are conveniently located, we sometimes forget to make sure they are actually good at what they do.

Review Management Is An Important Aspect of Running A Business 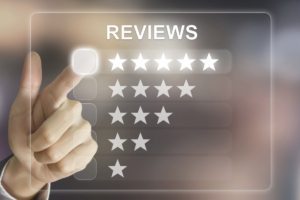 As reviews are here to stay and anyone out there can leave one, it is very important for a business to control them.  It isn’t necessarily about stopping negative reviews, but making sure the positives come through too and that when a negative shows up, you handle it properly. Sometimes turning a negative review into a positive one is a great selling point in itself. As long as you keep working on them, you won’t have to worry about the occasional negative taking you down.  Often that crazy negative reviewer shows themselves in their review text to be a bit off the wall or unreasonable, and a pleasant response is all you will need to show the world that you are a reasonable business owner.  Having a nick or two on your online reputation shows the discerning researcher that you are a real business.  200 5-star reviews is a red flag these days.  Keep working hard and doing a great job and your reputation will take care of itself, but keep asking for those reviews, as the more data you can feed to Google about how you perform, the more Google trusts and rewards you as an entity. Hopefully, there is only one Dr. Death out there in the US health system, but always do your research and remember that nobody pleases everybody, so if it seems too shiny and perfect, that may actually be a bad sign.