Google had announced long ago that they were officially moving to a “mobile first” index this year and have slowly rolled it out throughout the year. If you have an account with Google Search Console for your site, and you should, you would get an email when the official change happens for your site.  As a consultant for many small businesses, I have seen that happen sporadically throughout the year for different sites, but last night, a number of them all came at once.  These were mostly smaller business sites in the NJ area, so whatever way Google tends to organize the rollout, last night seems to have been a big day for smaller business sites going official.

The Trip from Desktop First to Mobile First 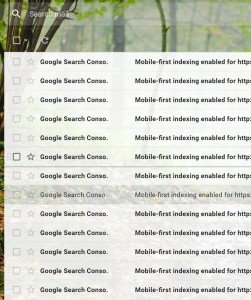 As traffic increasingly moved to mobile devices over the years, Google moved from what was once an index of the desktop version of your site, to telling everyone that they had to be mobile friendly and making it a ranking factor, to a sort of hybrid ranking algorithm that took mobile into account, to now basing your rankings solely on the mobile version of your site. If you have a mobile responsive site that basically presents the same information, that shouldn’t be a big deal, but if the mobile version of your site is significantly different, or worse yet, you are not mobile friendly still, then you may seem some major shifts in your rankings and traffic after the mobile first switch. Many sites have looked at tools like AMP and other speed tools to speed up the mobile experience.  You should be very aware of your mobile load time, as it is definitely a factor in your ranking.

If you don’t have Google Search Console set up on your site, I would recommend it. It is fairly straightforward. Especially if you have administrator rights on your Google analytics.  It tells you a lot about your relationship with Google, from what pages are being indexed, to any errors or penalties that may be going on.  Anyway, I woke up this morning to an email box filled with mobile first announcements. This is the most I have ever had in a 24 hour period with all of the sites I monitor or maintain.  Chances are your site is now officially mobile first or will be soon, if you haven’t gotten the message yet.